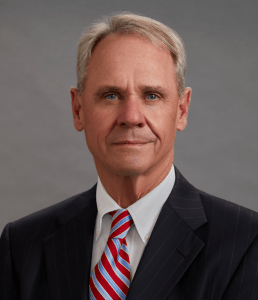 Harry Stewart is The Dutra Group’s President and Chief Executive Officer. Prior to this role, Harry was Chief Operating Officer and President of each of its operating divisions: Dutra Dredging, Dutra Construction and Dutra Materials.

Harry earned a Bachelor of Science degree in Civil Engineering from the University of California, Davis, and is a Registered Professional Engineer, licensed in California.

After doing geotechnical engineering work for a variety of projects in Northern California, Harry joined The Dutra Group in 1983. Since then, he has worked in project engineering, estimating, project management, plant management and general management — virtually all of the significant responsibilities typical of a mining/dredging/marine construction company.

Many of Harry’s accomplishments have occurred in conjunction with projects for the U.S. Army Corps of Engineers, including work with the Corps’ San Francisco, Sacramento, Seattle, Anchorage, Hawaii, Los Angeles, Mobile, Jacksonville, Wilmington and New York Districts.

More recent projects for which Harry has been responsible include the West Marina Harbor and Brannon Street Wharf projects on San Francisco’s waterfront, and tsunami salvage in one of California’s most northerly coastal communities with the rescue and repair of the Crescent City Harbor Inner Boat Basin.

Harry played an active role in Dutra’s 2012 acquisition of the hopper dredge Stuyvesant and has been central to implementing business development and operational strategies for the vessel.